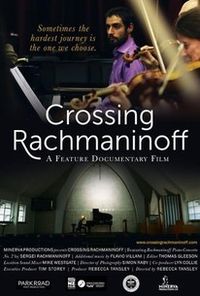 You can find the video here

The trailer of a documentary which follows Auckland-based, Italian-born pianist Flavio Villani as he prepares to play Sergei Rachmaninoff’s demanding Piano Concerto No. 2 in Italy — his debut performance as a soloist with an orchestra. Director Rebecca Tansley, who funded much of the documentary herself, tails Villani from four months before the recital that will challenge the prodigal son to affirm his career choice and sexuality, in front of his Italian ex-military father. When it debuted at the 2015 New Zealand International Film Festival, Crossing Rachmaninoff won a standing ovation. The documentary also features another Italian musician living in New Zealand, concert pianist Matteo Napoli.